We’re not Facebook official yet, but my bike and I are pretty serious.

From a bike sale at the Hub on Minnehaha, I rescued a bright yellow and pitiful old thing destined for that junkyard in the sky. She had wide palm pads on the handlebars – something I could have bought inside. But the pads were hers and they became her, so they increased her overall appeal.

She had no shock absorbers on seat or tire, her seat was something hard and unyielding, and her bald tires whispered “I’ll hold your weight now, but for how long?” But when I leaned back in her, my chest a relaxed but low diagonal, my arms were strong with shoulder blades near touching, and suspended by my frame, I hang-glided.

Her pedals were grippy and despite a bent axle plate was smooth and responsive to bursts of speed from standing. The handlebars were slightly asymmetrical and incremental gear shifts miss-meshed with gear teeth numbers, but she took the steepest hills in both directions.

Little by little I added to her. A double lock system that, while cumbersome, meant a thief would have to pack two kinds of pliers to take my steed. The chain flopped out perilously locking my pedaling in place until I could brake, pull over, and readjust my knotting. But it added to the dumpster mystique. I could leave her confident no one would steal her.

A bell was necessary sharing paths with walkers, but one bell had a compass marble sitting in the middle should I ever get really lost. The bottle holder was the cheapest metal one at the store, but my big ‘ol Contigo fit securely in what only looks like the crappiest, and most precarious bottle holder you’ve ever seen.

The helmet reminded me distinctly of childhood bullying, but it was big, light, and even had a flashing break light on the back. I got a blue one to match her eye-piercingly retro mellow, yellow.

I brought her home ecstatically. On the ride home, I could see her as she is today – An alternating syncopation of black on yellow, hanging low to the ground, flying past all the traffic, making moves with a great big ‘ol bootie. Could she have ever been anything but a Yellow Jacket? No, I decided, and named her Vespula, the Latin for her species – Ves for short.

Still, I couldn’t tell her I was in love just yet.

Now I’d navigated by bike for years in both China and the US, but I hadn’t used my phone’s GPS for anything but eye-balling taxi drivers driving in circles. Somehow using Maps by bike made sense – I hadn’t ever really explored the city of my childhood those decades ago. I needed to colonize the streets in my mind the way Google Web Crawlers colonized the internet.

Thus, I found a small smartphone holster that attached to the main bar beneath me as I rode. It was a revelation. With bluetooth headphones under helm, and a solid playlist to Random from, I got to live a music video everywhere I went. 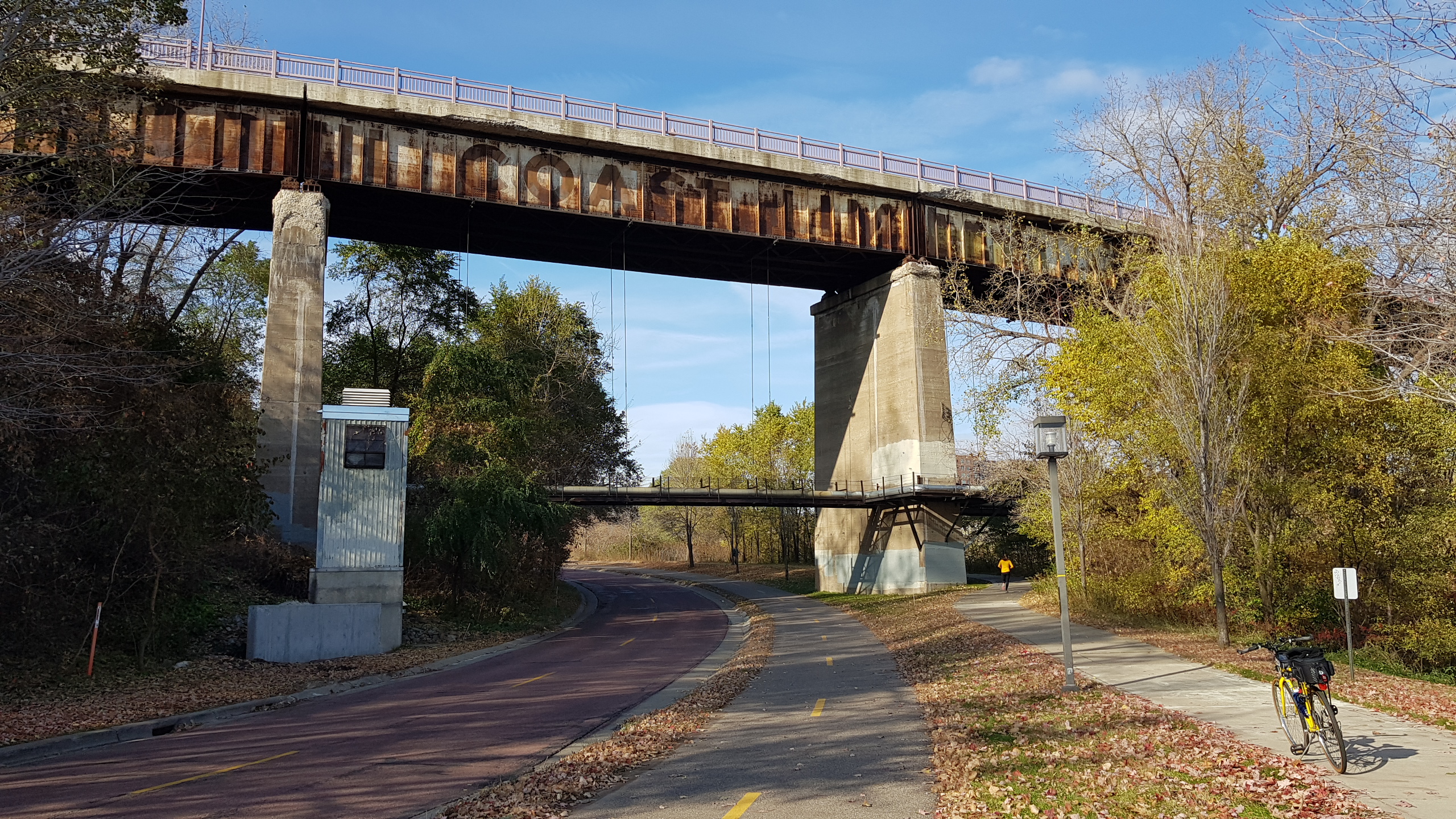 I’d hit a hill and Bobby McFerrin’s Coyote would come on “I think I can-ing” as I went. I’d hit a big intersection in need of detailed signaling just as Aesop Rock would lay down some sick beats. Then suddenly I was dancing arms in the air around the bend, zig zagging in my lane in time to the music. It would get cold and gray as Joni Mitchel would come on to summon the spirit of explorative youth, leading a guided meditation on all of my life’s decisions. Yet Passion Pit seemed to inevitably join me for the first song of the ride to blast away all but the widest smiles.

I started with short rides along River Road as a poor excuse for jogging. But with a Saturday afternoon I discovered it wasn’t that far to Minnehaha, or Merlin’s for that matter, or munches up on Lake Street. I started to find myself increasingly riding at night. But with a bright head and tail light, cool summer nights became the most refreshing way to end an evening. Once I was driving at all hours of the day, I hung up my car keys and invested in a solid cargo bag to sit on a new rear tire frame. My purse now fits easily in the back and except for the 5 minutes of freezing my ass off, while I strap, satchel, bundle, lock, sync, and shuffle my life for the commute – she handles me pretty well. At last, she has epitomized my vision for her.

Sadly, the Stark’s were right – Winter was coming. Rain, wind, and snow threatened to trap me in my room. But by then Ves and I were going steady. I’d show up at parties and events panting and sweaty feeling plenty warm, but getting underway before the sun was up could be a hellish thing.

I learned to layer up like Ves and my clothing choices become more strategic. My hair couldn’t sit in a bun under my helmet, but I hated re-doing my hair every time I stopped. So I discovered my old favorite hat could hold a loose pony-tail in doors, or release a thick scarf down my neck. I needed gloves and found ones with wrist warmers that looked cool to boot. Hoodies were great, but couldn’t block the wind. What luck? My Mom’s new retirement gift of a leather jacket doesn’t fit her. What a shame… for her…

Sometimes I need a long ride with Ves with no destination. Sometimes we go, but stop every 10 feet to take some photos. It was dumbfounding to realize the world outside continues to be beautiful. Once I realized Ves and I could explore it while getting where we’re going (and burn a few calories to boot), I was hooked. I only drive when I absolutely have to now.

All bundled up at night with only the elliptical inverse shadow from Ves’ headlight to see, I feel there’s a trust between us. She makes sure I can see all the branches, wet spots, small critters, and obstructions in general that might send the two of us careening into hard earth at 20 mph. I make sure to avoid them, and will fight to keep the momentum going. In the space of that relationship I sense a comfort and a freedom I can’t previously recall. Together we own this city.

Thus, recently Ves and I have taken things to the next level. I contemplated for a while a new seat to accommodate my modest bubble butt. But then discovered that her own seat – stiff and generic as it was – had a firmness and shape to it that was not altogether unpleasant. In fact, I discovered Ves’ seat could be very pleasant at times when pot holes jumped out of nowhere or the asphalt changed to repeating wood planks. Like any good top on the bottom, Ves can be very supportive. Plus her own need for reciprocation is merely a bit of oil or a good pumping every now and again.

I know one day her age will get the better of her. I’ve never minded older ladies, myself. But someday I’m sure I’ll get an urge for a more robust vessel – maybe with a lighter frame and more shapely tire treads. But that day isn’t today, and you don’t need to tell her any of that anyways. It would only make her fret.

We’re happy together. Though soon the walkways will turn white and icy, we’ll keep each other warm and lubricated all winter long. After all, she’s my steed.

Sweeping Up Your Front Steps